#3. Experienced Billy Mamaril (6'6''-F-80, graduated '02, currently in Philippines) managed to help San Miguel Beermen in a victory against the league outsider Hotshots (0-2) crushing them 113-92 in the Filipino PBA on Sunday night. Mamaril recorded only 2 points in 9 minutes on the court. San Miguel Beermen (4-3) is placed third in the PBA. There are only four games left until the end of the Regular Season. So now every game will be critical. This year Mamaril averages in two games. He is a naturalized Filipino.


Other former Bakersfield College players, who play in pro basketball: 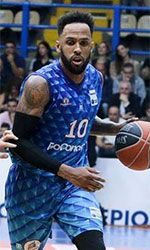